Prefabricated homes, often called "prefabs" and “kits” and “panelized” refers to a broad range of residences that have been constructed using panels or pieces that were fabricated before their arrival on site. The panels, parts, and modules are usually manufactured in standard sizes and sections that will allow for easy shipment, handling, and site assembly or installation. These advanced pre-assembled components are NOT a manufactured or mobile home because they require on-site assembly, installation, and inspections.

Except for the indelible image of Daniel Boone who single handed built log cabins in the expanding west at the turn of the 19th century, previous building systems usually required a large community workforce. Through the 19th century, European and American homes were largely timber-framed structures with ‘infill’ of waddle and daub (a mixture of sticks, straw, clay/mud, and painted with milk paint). These pre-fabricated timber-framed structures have more than a 500-year history.

The timber joinery was cut ‘off-site’ (pre-fabricated just like it is today), delivered, followed by labor-intensive raisings by a large community, often called a ‘raising bee.’ Today is it 4 guys and a crane. 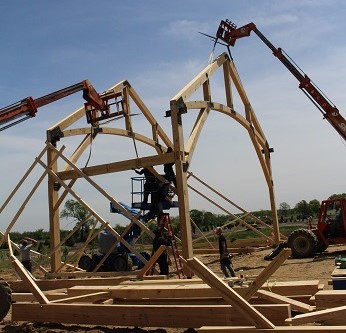 Modern prefabrication has been around since the industrial age starting in the 1850’s with Victorian components and wall assemblies replacing the Timber Framing method of construction. The Industrial age brought higher quality steel, new tools and machinery, factories, energy resources, and a smaller labor force to satisfy a growing and mobile population.

Our Independence, the Louisiana Purchase, famines, gold rushes, homesteading, a couple of world wars, and massive immigration into the US fueled demand for adequate, faster, easier, and cheaper shelter.

Instead of large heavy cumbersome hand hewn or hand pit-sawn beams, this equipment could easily cut trees into much lighter and smaller boards and studs creating ‘light’ construction. The industrialists and engineers/designers responded with every order of inventive building system including balloon framing, reducing the number of people in any event such as purchasing materials, reducing the 40+ construction steps to 26, and using component mass production installed by sub-contractors. This allowed easier delivery and a faster, higher quality building process. 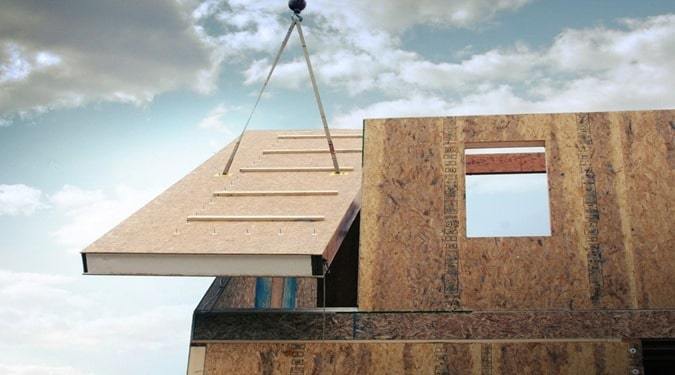 Today, prefabricated home components are ready made and shipped prepared to install in a new home. SIPs are designed on CAD. These drawings are given to the fabrication facility where they are made to exacting standards. Most often processed using CNC equipment to cut the 8’ x 24’ SIP panel blank to the size and shape of the home with the window and door openings in the right size and place to exacting standards to meet the plans exactly. This takes all the guesswork and on-site human error out of the equation while making the best use of these super energy efficient materials and reducing waste substantially. The result is a better-built home in less time and for a lower cost.

Who We Work With